There are two parts to the Award Scheme

The main part is the general activity that leads from Venturing Skills Award to the Queens Scout Award.
The other part is the Major Interest Award that is intended for the Venturer Scout who is heavily involved in a particular sport or activity.

To achieve this award you must meet requirements for:

To achieve this award you must be able to:

Aside from being a Venturer Scout, gaining the Venturer Skills Award and completing the requirements of the award areas above, there is much more than just tests. The Queen’s Scout Award is recognised by the community at large as a worthwhile achievement and a certificate is presented by a representative of the Queen. The main point is that the Venturer Scout is recognised as being of good character and a worthy member of the Scout Movement. Therefore, the additional requirements are:

This recognises a special interest that may have developed or been established under the guidance of an outside organisation. The speciality should be a subject that would come within the range of activities covered by the four Queen’s Scout Award Areas.

Areas in which a Venturer could achieve the major interest award include:

It is expected that the Venturer Scout will have gained the Queen’s Scout Award or be very close to completion before the Major Interest Award is attempted. However, it is not intended that Venturer Scouts should be prevented from attempting the Major Interest Award simply because they have shown no progress in other aspects of the overall award scheme. 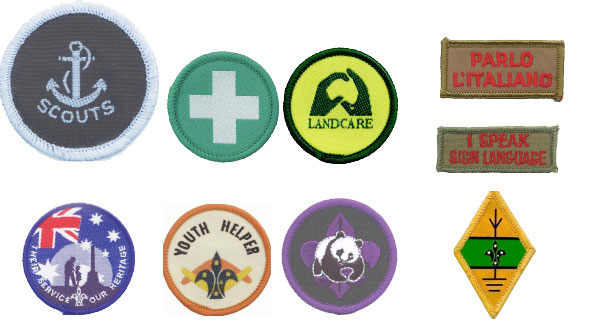 The Rover Link Badge links Venturer Scouts to the Rover Section and is the next step towards the summit of the Scouting journey. Completion of this badge prepares the Venturer Scout for advancement to a Rover Crew. To earn this badge, formal contact must be made with a Rover Crew prior to joining one and Rover activities must be participated in with at least one being an overnight activity